Nearly every month, in almost every corner of the world, party-going people gather to celebrate a joint interest, tradition, or holiday, turning a once-ordinary event into a festival. While festivals of all sorts are typically worth a pause, no two are created equally and only a few can be described as epic. After sifting through the most popular organized events in the world, these five were selected for their ability to give you an experience of a life time by welcoming you into a party unlike any other. 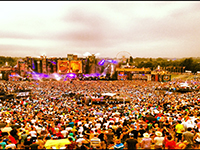 1.) Tomorrowland: Boom, Belgium – Located in a small Belgian town between Antwerp and Brussels, Boom is a seemingly unlikely home for this fairytale inspired electronic music mecca that has become one of the most notable organized music festivals on the planet. Beginning in just 2005, 2013’s festival will mark the 9th Tomorrowland, transforming the town of Boom into the home of electronic dance music and 185,000 partiers from all over the world – many of which stay on-site and the now infamous Dreamville. This year’s event takes place over four days from July 26-29, but unless you’ve already got your tickets in the bag, you better start planning for next year – tickets were sold out in less than an hour.  http://www.tomorrowland.com/en 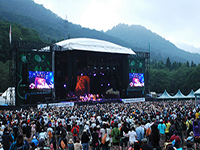 2.) Fuji Rock: Naeba Ski Resort, Japan – Although named for the it’s first disastrous year in which the festival was located near Mt. Fuji and effectively ruined by a surprise typhoon, Fuji Rock has bounced back with a vengeance, quickly becoming the first and largest outdoor rock event in East Asia. Since 1999, the festival has been held at Naeba Ski Resort, high up in the mountains of Niigata, one of Japan’s most stunning displays of natural beauty. At first arrival, landing at Fuji Rock is like discovering a musical haven in the wilderness; the view is unlike any other. Today, the festival has ballooned into a +100,000 person event, making it the largest musical festival in Japan, attracting world-renowned artists like Radiohead, Coldplay, and the Oasis. Fuji Rock 2013 is set to take place July 26-28, with regular tickets opening up June 15th. http://www.smash-uk.com/frf13/ 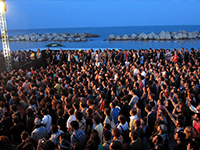 3.) Exit: Novi Sad, Serbia – In 2000, three Serbia university students set out to provide high-energy entertainment to their countries youth while simultaneously bringing pertinent social topics to the forefront of their society. They chose 18th century fortress on the coast of the Danube, and ever since, a combination of its grass roots political beginnings, stunning backdrop, and star-studded lineup has solidified Exit’s reputation as one of the biggest and best musical festivals in Europe. Today, Exit annually draws more than 250,000 revelers to the four day event that hosts 500 bands, ranging from Duran Duran to Guns N’ Roses, playing on 20 different stages. Taking place from July 10-14, this year’s show is sure to be another legendary festival in the making. http://www.exitfest.org/en 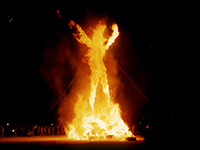 4.) Burning Man: Black Rock Desert, Nevada – Trying to explain Burning Man to a first time attendee is like describing a color to a man who’s never seen – it simply can’t be done. Taking place in the middle of the desert, over the course of a week at the end of every August, this festival is unlike anything you’ve ever seen before, or ever will again. Infamously beginning in 1986 with a bonfire built on the summer solstice by a group of friends, today this event is most noteworthy for its environmental care, unorganized perfection, and of course its namesake: the giant wooden effigy burned each year. If you’re looking for a perfect lineup, this isn’t it – Burning Man is infamous for its collective anarchy supported by self-entertainment. However, if you’re looking for a once in a lifetime experience, this one won’t disappoint. http://www.burningman.com/ 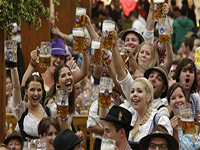 5.) Oktoberfest: Munich, Germany – It may not be a diamond in the rough, but you simply can’t talk about epic festivals without including the mother of all organized mayhem and fun. Officially beginning in 1810, this 16-day beer-drinking extravaganza now draws in more than 6 million people a year, making Oktoberfest both the largest and oldest festival in the world. The event may be the traditional harvest celebration for Bavarians, but it’s also the world’s best excuse to drink 1-liter beers, dance on tabletops, and ogle pretty ladies in dirndls. Although copies are now held the world over, when it comes to beer festivals, there’s nothing else in the world that quite compares to the original. http://www.oktoberfest.de/en/