A Girl’s Fantasy. Where do you dream of going?

Home » Featured Stories » A Girl’s Fantasy. Where do you dream of going? 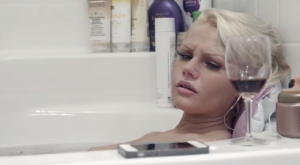 A text to another world

Who Doesn’t dream of traveling the world, experiencing new adventures and meeting new people?
Alisha, a beautiful, but stressed out, young waitress, returns home from another uneventful, long night at work.  Exhausted, she quickly undresses and sinks into a hot, bubble bath. She sips a glass of red wine, and gently unwinds, listening to some soft tunes on her iPhone.

Alisha day dreams about getting away. Where? Anywhere. Somewhere fun. Anywhere but work. “Oh, and my boyfriend is nagging the shit out of me.” at the moment, she is mad at everything.
Another sip of wine calms her down and as she sips some more, she slips deeper into the water and further away from her life as it is.
Alisha is nearly comatose, but in a good way, relaxed, at peace.
The moment does’t last long enough,….cling…vibrate,…clink, her phone nearly jolts her out of the tub.

It’s a text, about a party, “The Festival of Colors.” it says and displays the event on her screen. She stares at the invite for a moment and her mind wanders , “Wow, how great would that be.”
Little did she know, it was just a click away.

As Alisha’s wet fingertips click to respond, she is zapped  into a world of fantasy. Instead of high heels and beer soaked stained floors, sandy beaches and ocean waters tickle her bare feet.
One second she is soaking in the sun and then an instant later back soaking in the tub. The shocks get more powerful and Alisha fearfully, clutches the sides of the bath.  Alisha’s thrusting body creates waves that spill out over the sides of the tub. She continues to jolt back and forth from fantasy to reality.  To her, It seemed like eternity, In reality, was mere seconds.
Finally she sits up and drops the phone to the floor,

“Was it a dream, she thinks. Was it the Wine?” Alisha, gets out of the tub, throws what’s  left of the wine into the sink and heads off to bed.
“I must really be tired,” she concludes.  She puts on her nighties, turns her phone off and sets it on her nightstand.

It does’t take Alisha long, to doze off. Once asleep, she is taken deeper into another world. She quickly finds herself traveling in search of this make-believe land.  A plane, a train, Alisha seems to know exactly where she is going, and makes all the right connections.

She arrives at her destination and slowly walks though a vast empty field, till she reaches the edge of a cliff. She peers over the cliffside. Alisha can see for miles and it is stunningly beautiful.  Sparkling turquoise ocean, sunshine and sandy beaches for as far as she can see.
Just as in her dream.  Off in the distance, she sees a rainbow of colors sweeping through the air, like a tornado.

The colors get thicker and as they get closer and Alisha is nearly swept away by its force and beauty.  Like a painted canvas, Alisha’s body is splashed in vivid colors. The colors not only brighten her skin but the warm sensation, hugs her body and touches her soul. She suddenly feels even more beautiful than she already is.  Like she didn’t even know it before.  But this wasn’t about her, it was about the beauty of the world, mother nature and Alisha was just finally feeling like she was a part of it, she was connected.

Alisha is now glowing. The colorful powder pushes aside, opening like stage curtains to a spectacular vision bellow.  “Wow, everything is so clear to me now,” she emphatically says out loud.  In the distance,  there are thousands of people dancing, all covered with the magic powder, like a big box of happy crayolas had just come to life.  This was it! Her invitation to the “Festival of Colors”

Alisha, is now living the dream, dancing in the Hindu tradition. Not a care in the world, only happy people with painted faces drenched in love and colorful powder.   “Is this heaven?” she thinks. All’s she knows… is that she does’t want it to end.

What is that annoying sound, she thinks? Ding, ding, a ling, ding, a ling a ling a ding . The sound rings home, “I don’t have my cellphone,” she thought, as she instinctively  reached for her pocket.

But It was her cellphone, only it was back where she left it, on her nightstand, right next to where she was sleeping.
Alisha, abruptly wakes up..
“Damn, it was only a dream,” she shakes her head, to try and make sense of it all. “It seemed so real,” she thought.

Alisha heads to the bathroom to get ready for another routine day of, “What can I get for you?”
Without her first cup of coffee, some cool water will help wake her up. She runs the faucet, cups her hands full of water, bends her head down to the sink and splashes her face.
As Alisha lifts her head from the sink her reflection is revealed in the mirror.  She is stunned. Her face is colored with the powder of the Hindu Festival. Blue, Yellow, Green, Red. She touches it to see if it is real. It is, and a big smile spreads across her face.
She laughs, and again smiles back at herself in the mirror, content in knowing, she did in fact, Live the Dream.